The Bite of Summer

It’s starting to get really hot as summer sets in for many regions of the world. Even in the last weekend, we had temperatures of 100F throughout the Bay Area (where’s my “June Gloom”?). Over the last decade, we have seen record-breaking temperatures and drastic changes in seasonal climate, in which only some people believe are actually real and worthy of concern. When we think of summer, many people try to make the most of the longer hours of daylight and more palatable temperatures by spending more time outdoors. This simple act of migrating towards wilderness, combined with shorts and tank tops, makes for a memorable “meet-cute” scenario, only instead of casually encountering the love of your life, you’re mingling with vectors that harbor disease.

My husband often calls me a buzzkill because I can’t help but interject when friends, relatives, or acquaintances tell me that they are planning a summer trip to a location that I know is endemic for one, two, or many vector-borne diseases. “I hope you are bringing some DEET,” I say, explaining that all of the information you need is conveniently located on the travel.state.gov and CDC websites. People often get pissed off when I suggest they take precaution instead of flaunting the new swim suit they’ve purchased just for this trip. Whether they take my advice or not is completely their choice, but I can’t help but feel like I’d be partially liable if I didn’t at least warn them.

Many people are still afraid of traveling to tropical islands and throughout South America, as Zika is still in recent memory, and many parts of Europe, for fear of being attacked by a terrorist. Instead, people are opting to explore the natural wonders in their own “back yard”, stating that it’s not only “cheaper, safer, and less of a hassle”, but also that they are afraid He Who Shall Not Be Named might start selling off our National parks for industrial use and that they’ll miss the Instagram photo-op forever if they don’t go now.

Are we really safer in the United States? Sure, there are many reasons to believe that, from an infectious disease standpoint, we are. We haven’t had autochthonous malaria here since the days of our founders, and most people have access to and choose to get vaccinated.

But people die or suffer from chronic conditions as a result of infectious diseases here all the time, many of which can be prevented with basic action. 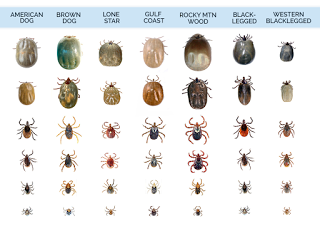 I write about tick-borne diseases almost every summer, and for good reason. Tick-borne diseases are spread by ticks, and come in the variety of flavors. Many are treatable if caught before chronic illness sets in, as with Lyme disease, but there are still some that cannot be treated. In all cases, the tantamount risk lies with getting bitten by a tick. Without the tick, you can’t get an infection. It’s as simple as that.

But we all do things that we shouldn’t. I’m guilty of it too! I run my local trails in a t0shirt or tank top, risking tick bites every time I do it. Why do we refuse to let these vectors take control of our lives? Confidence, maybe? Blissful ignorance associated with a “that won’t happen to me” attitude? I’m not sure.

With that little diatribe, let’s talk about Powassan virus, or “POW” for short. POW is an RNA virus from the genus flaviviridae, meaning it is related to many well-known mosquito-borne viruses like dengue virus, West Nile virus, and yellow fever virus. POW is definitely a lesser-known tick-borne disease, because I think most people only have space for Lyme disease in their cerebral storage. There have only been 75 confirmed cases of POW infection in the US in the last decade, so it’s not as sexy to the news as larger outbreaks. Yet, it’s one to note, because there are no treatments available, aside from symptomatic treatment. According to the CDC, POW neuroinvasive disease cases have been reported in Maine, Massachusettes, Minnesota, New Hampsire, New Jersey, New York, Pennsylvania, Virginia, and Wisconsin between 2006 and 2015.’’

That’s right, it’s a neuroinvansive disease, which means after being bitten by an infected tick, the virus can infect the central nervous system, causing encephalitis and meningitis. Upwards of 10% of cases are fatal, and the CDC reports that approximately half of those infected suffer from permanent neurological symptoms.

Not only does the warmer weather drive humans outside, it also expands the territories where many vectors, like mosquitoes and ticks, can survive and thrive. As temperatures increase and stay warmer longer, tick populations have expanded, increasing the likelihood of being bitten. Many predict that there will be a dramatic increase in the number of POW infections this year, as weather continues to warm.

There is no treatment available for POW infection, aside from symptomatic treatment. Since POW is a virus, the antibiotics used for Lyme disease won’t work on a POW infection. Yet, most people who are infected are asymptomatic, and won’t experience any of the symptoms of POW disease. POW isn’t transmitted from person to person, so there’s risk of unknowingly infecting others if you are infected.

If you’re planning a camping or hiking trip, or you’re an avid trail runner like me (and by avid, I mean, I’m amateur at best), I suggest reading over these tips on preventing tick bites, and remember that POW cases have only been detected in the northeastern states, and around the Great Lakes.

If you do find a tick on you, here’s a video that shows how to remove a blacklegged tick:

Posted by underthemicroscope at 7:57 AM 4 comments: