Boy howdy, if I haven't received loads of encouragement! As I stated in my last entry, I've had to take some time away from writing blog entries so I could wrap up a few major projects. Since that post, I've received tons of emails wishing me luck, and others saying "I hope you will return to writing when you finish!" So, a gigantic thank you to everyone who wished me well in my time away from Under the Microscope.

Yet, my time apart is not completely over. I'm currently in San Diego for a collaborative work project with The J. Craig Venture Institute, and when I return to the Bay Area, I will be quickly hopping on a plan for a few weeks for a much needed vacation. I will try to write in the meantime, but promises are always futile.

I drove to San Diego instead of flying, partially because I wanted to bring my bike with me, and partially because I wanted some time alone to think. I spent a lot of time listening to old podcasts from Radiolab, which got me thinking about future blog posts. Trying to decide what to write about next is troubling for me, believe it or not. Writing is not a natural habit for your truly, unless its in a lab notebook. I can remember all of my major writing accomplishments throughout my personal history, as they were few and far between. In the seventh grade, I chose to write my literary research paper on the bubonic plague, narrated by the only unaffected living thing in the town: a tree. Oh, twelve-year-old me, you were so dark, so profound! I had clearly been listening to too many records by The Cure. The next was my Advanced English research paper that I chose to do on Bram Stoker, and other historical works which focused on vampires. If I would have known, at age sixteen that Twilight would be a thing in future times, well, I would have been a rich little idiot.

Carl Zimmer has always been a role model of mine (ok, I'll admit it, I have a crush), as he often takes the side of the parasite. Not only is this rare, but it's exactly the standpoint that I've always taken. Think about it: humans are, without a doubt, the most advanced life form of which we know, yet we can easily be challenged and occasionally defeated by "lesser" life forms. Parasites, some of which are even single celled organisms, bacteria, and viruses, which aren't even considered to be "alive"! Sure, we've evolved and developed habits and methods to limit our exposure and risk of such encounters, but they don't always work.

This show about parasites always makes me laugh when I listen to it because people always ask me if I've ever heard of Jasper Lawrence, or "that guy that sells worms". I never really know how to react, because I do applaud Mr. Lawrence for taking his medical care into his own hands (or should I say gut?) and I am totally happy that shows like Radiolab have made that sort of science accessible to everyone... but starting your own business off of it is a little sketchy. Mr. Lawrence keeps a blog associated with his business, wherein he describes his family life and his allergies. There is one entry where he discusses the risks associated with obtaining hookworms in the wild (ie, naturally), but it's basically just a review of wikipedia pages.

So, maybe I should talk about hookworms? I've written previous entries on tapeworms and other types of parasitic nematodes, but I can't recall an entry that specifically focused on hookworms.

Ascariasis and infections by Ancylostoma duodenale and Necator americanus are pretty harmless, and while uncommon in the United States, it is highly prevalent in other regions of the world. You often find prevalent hookworms in areas where modern plumbing is unavailable, and human feces is used in fertilizers. Poop everywhere!

The filariform larvae of A. duodenale and N. americanus cause infection by burrowing into the skin, typically around the feet or ankles when exposed in shallow waters or muddy areas where infected feces is present. In instances where feces is used for fertilizer, Ascaris eggs can be ingested with fruits and vegetables that are not thoroughly washed.

Once in the body, the adults attach to the lining of the small intestine and feed on blood and protein sources. There are very few symptoms associated with a hookworm infection, and many people are unaware of infections that they've had for years! If an infection is particularly heavy, the individual can experience anemia and protein deficiency.

What's amazing about these creatures is that they've phenotypically adapted to their ideal environments. They may be blind and deaf, but there are many different types of hooks and "teeth" that allow them to anchor themselves to one tissue surface for years. I've always imagined the following nerd references when studying hookworms and tapeworms, but what can I say, I'm totally unprofessional. 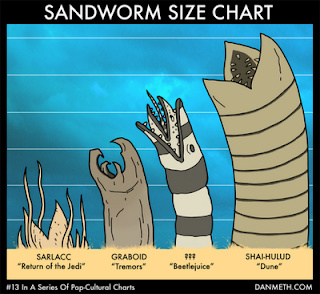 In the real world (sighhhhh), hookworm "mouths" usually have one row of teeth, like this: 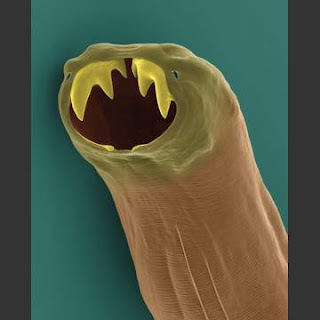 This photo is entirely not scary if you imagine it's singing opera.

I should say that I've always approved of the Hygiene Hypothesis, as I was raised in an area where many people suffer from seasonal allergies, and I do not! Maybe I'm just biologicaly supreme, or maybe it's because I did have my own run-ins with a few parasites at young ages. Either way, this theory is commonly centered around the ability of your system to produce a specific types of antibodies (IgE) that are associated with allergic reactions and helminth diseases (parasitic worms).

While that is all I have time for today, I want to end by saying, once again, that I will update as much as possible. Also, I'd like to send out magical vibes to Carl Zimmer, in hopes that he might agree to have lunch or dinner (or tea!) with me when he is in San Francisco in October. Maybe?
Posted by underthemicroscope at 5:39 PM 1 comment: