I was inspired to write this entry because I have a number of friends who have recently crossed over into that place in your life where you suddenly want tons of kids. Some of them have just recently birthed their first child (congrats to you), and some are just starting to feel that warm glow of constant nausea that will stick with them for the next few months. This is an awkward time for me, personally, because I fall into the category of "never, no, not interested" when it comes to babies. I've always kind of been that way, and yes, I fully acknowledge that my feelings could change in the future. I also want to point out that it would be fine if my feelings didn't change, because it's not an obligation that all women have (to have children, that is). I should also say that I like kids, and I think that they are amazing little creatures.

I wanted to bring this up for two reasons:
1. being pregnant has to do with the parasite I'm going to discuss later in this post, and
2. the Washington Post published an article about Eugenie Clark, who just passed away on Wednesday. The article is a great little summary of her life, but this is one of the most important parts (in my opinion):


"Professors at Columbia University told her it would be a waste of their time to admit her to their graduate program because she’d end up as a housewife..."

Granted, this was in the 50s, but it struck me to see that so boldly stated. I've had mentors make comments like that to me within the last FIVE YEARS. While it's really important to state that women like Eugenie Clark have paved the way for women scientists, we still have a lot of work to do. I've had a lot of really incredible mentors, but it's hard to move past comments that one or two bad apples may have made, especially in such early and exploratory years of my career. If we strip away all the statistics about women and minority populations in science/STEM, we can still come to the same conclusion about comments that assumingly discourage someone from doing what they want to do with their lives: it's mean. It's really mean to do that to another human being, no matter what population they do or do not fit into.

I know that was more into my personal life that I usually divulge, but that article really inspired me.

So, back to my friends and their pregnancies!
A majority of my friends that are getting pregnant/having babies also have cats. I know, I know, you know where I'm going with this because its old news and everyone should already know about it. Well, not everyone does.


Toxoplasma gondii is a parasite that can infect all warm-blooded animals and birds (as intermediate hosts), but is primarily centered around the definitive host: cats. Actually, over 200 mammalian species can act as an intermediate host for T. gondii, which makes the prevalence in humans pretty high.

As you can see below in this terrifyingly hilarious life cycle image (thanks, internet), the life cycle of T. gondii (sexual development) is completed in the intestines of a cat (even if it is a cross-eyed Halloween caricature of a cat like the one in this image).

Infection in humans is usually asymptomatic, meaning a non-infective (dormant, non-pathogenic) stage of T. gondii could be in you right now, and for most of your life without you even knowing! Most infections are triggered by a state of immunodeficiency. There have been some studies that have looked at the possible correlation between T. gondii infection and schizophrenia (a few years ago, you may have seen a bunch of sarcastic articles about how your cat is trying to control your mind, etc.). If you do develop acute Toxoplasmosis, you'll usually only experience non-specific symptoms, such as malaise, fever, and other flu-like symptoms that can resolve themselves within a few weeks or months. A lot of times, Toxoplasmosis isn't diagnosed correctly because proper diagnosis is really dependent on the organ system that is infected (heart, eyes, brain, etc.), and depends on the pathology lab to identify the organism in your tissue samples.

The biggest issue with Toxoplasmosis comes when you are pregnant, because it can cause spontaneous abortion, or if you carry to term, can be passed congenitally causing hydrocephaly, mental retardation, cerebral calcification, and chorioretinitis.

If you are pregnant and have an indoor/outdoor cat that uses a litter box in your house, I'd suggest avoiding any contact with it for the time being. You can be exposed to infectious fecal particles while emptying the litter box, that can be ingested accidentally. I'm not really sure why you wouldn't wash your hands thoroughly after handling an animals wastes, but that might be another thing you'd want to start doing, especially now that you are pregnant and all.

Another fun thing about T. gondii is that you can become infected through organ transplantation! Organ recipients can get Toxoplasmosis from the new organ, or from self-activation (if you've already been infected with a dormant, non-pathogenic stage, but go into immunodeficiency after surgery). This is pretty rare, but it is possible. 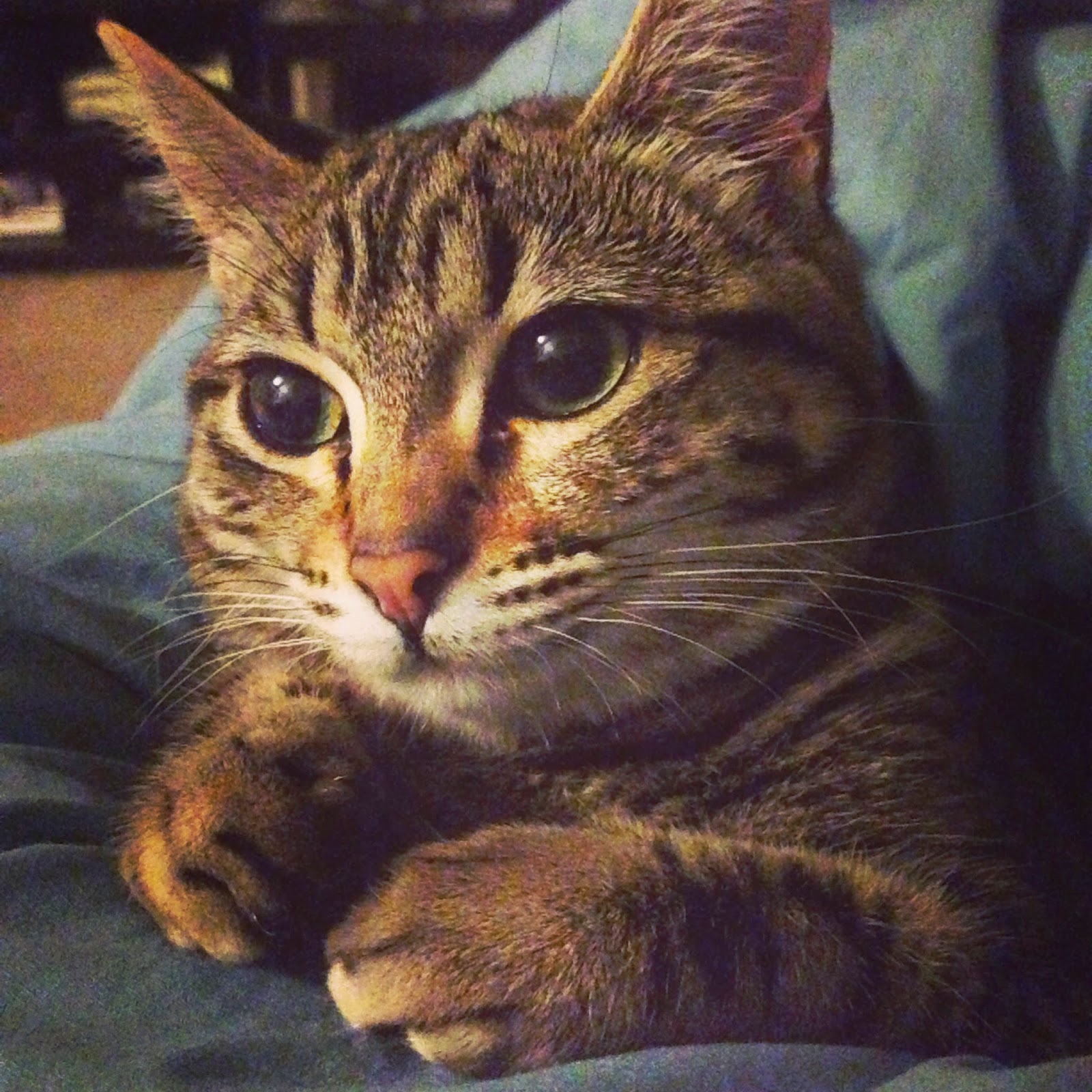 Here's a picture of my cat, Milo (aka "Beef"), who usually helps me write these blog posts, and made it known that she does not appreciate this particular entry.

Posted by underthemicroscope at 5:01 PM 2 comments: