I worked as a health educator on a college campus for a few years, and the stories some students told me about their experiences with sex ed in high school were classic. Sadly, about 1/3 of the students I encountered had never had proper sex education; either their parents opt-ed out of having their children be a part of such classes, or their educational institution failed to offer such crucial lessons. What I'm saying is 1/3 of the incoming freshman I taught had no knowledge of basic sex 101, no knowledge of their bodies, and no knowledge of the sex-crazed world they were about to be thrust into (was that pun intended?). I don't know about you, but this makes me scared and sad. But it also made me love my job (my boss, however, was an entirely different story).

I was raised in the public school environment, and I am proud to say that I experienced too much sex education. No, I don't mean that in a sleazy way. The first time I remember being mandatorily immersed in proper school-run sex education was in the 4th grade. Being from a genetically-strong Italian family, you'd think I would be close to "blossoming into a woman" (barf.), like the other awkwardly prepubescent girls in my class, but that was a gene that was not active in my little bean-pole of a body. I was built like the boys in my class, and I had no intention of that ever changing. But, despite my ignorance to "the change" which would later ruin my teen years and cause me to discover feminism, I found myself learning anyway. To this day, one particular story continues to haunt me.

It was an overcast day on the playground of this California public elementary school ground. My class was outside, proudly displaying our homemade solar ovens, and anxiously waiting for the magic of science to cook the little nuggets of hot dogs that were rationed out between groups. My teammate and I constructed our solar oven out of cheap construction paper that seeped green ink into the hot dogs that sat idly in our little oven (elementary school teachers of the world: HOW IS THIS SANITARY?! Answer: it's not). One of the boys in my class dared me to eat one of the green hot dogs, and even though i had given up meat years before on my own will, I succumbed anyway, because I was not, and would never be afraid of science. Upon eating the green nugget of slimy meat, our teacher blew a whistle and instructed the boys to play while the girls came into the classroom to watch a movie. "Was it a Disney movie? were we being rewarded? Those boys are so smelly," we all giggled, because that was before girls knew how to be catty and mean.

To our horror, we discovered that it was not a Disney movie and we were actually being punished. While the boys ran around on the playground and farted on each other, we were being forced to watch short films with such titles as "Your first period" and "Accepting Change: A Puberty Story" (I made those up). I sat in the back of the class, and began to feel my palms get sweaty as I heard the glorious benefits of using pads. But then, things turned bad.

My first act of defiance against an authority figure was running out the door as my teacher yelled that I could not be excused. I ran to the first garbage can I saw, and promptly threw up. When I was finished spewing my guts out, I realized that all of the boys from my class had stopped running to watch me. One boy yelled "She's puking 'cause they are watching movies about people doing it!" and everyone laughed. I had no idea what "doing it" meant, but I didn't care because I was going to be excused for the rest of the day to lay around and watch Aladdin, so clearly, I had won.

In fifth grade, after we were segregated by gender and taught about using tampons and having crushes, the boys all asked if I puked again.

I would like to take this moment to say that, thanks to Facebook, I now know that I am one of the few remaining people from my middle school and high school classes that does not have kids. That's the benefit of throwing up in front of boys at a young age: no one wants to knock you up.

Anyway, why am I telling you this incredibly awkward tale from my childhood? Well, not only has congress been sprinting to restrict access to care for females in the United States, but one particular STI has been all over the news lately.

Gonorrhea, caused by gram-negative bacteria Neisseria gonorrhoeae, is here to stay, and it's not taking no for an answer. N. gonorrhoeae are motile bacteria which use type IV pili, which work to retract to pull the attached substrate towards the organism (kinda like the "hookshot" that Link uses to reach distant ledges in Legend of Zelda games). Additionally, some strains of N. gonorrhoeae extracellularly express Opa proteins, which can competitively bind to certain immune response receptors and down regulate the development of an adaptive immune response.


Incidence of drug-resistant infections of gonorrhea have risen (as have drug-resistant infections of everything lately), and apparently the American public is SHOCKED. This particular article states that "the [World Health Organization] blames the misuse of antimicrobial medicines like antibiotics, antivirals, and antimalarials for the formation of new types of bacteria, viruses, and parasites that resist current treatments", and while I know that's part of the case, I am also convinced that this particular issue of drug-resistant gonorrhea, especially in the United States, could have been prevented with adequate education. 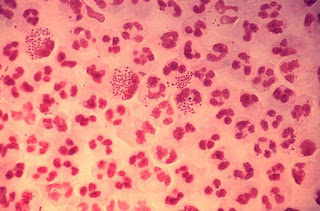 Not only is gonorrhea one of the most prevalent bacterial STIs in the United States (309,314 cases in 2010, which is actually down 16% from 2006), second only too Chlamydia (1.3 million cases in 2010, which has risen 24% since 2006), its also incredibly easy to prevent with safer sex techniques. When I say safer sex techniques, I'm not only referring to the use of a barrier method (condoms, dental dams, gloves, etc.), but to getting tested (and treated, if necessary) regularly and talking openly with your partners about sexual history and test results. If more people got tested regularly, the appropriate treatments would be administered at earlier stages of the infection, making it easier to treat, and the probability of transmission would drop dramatically. If more people were honest with their partners about getting tested, the number of cases each year would also decrease dramatically. But, that's too difficult.

Here's another link that's not usually made: since cases of undetected and untreated gonorrhea and chlamydia are rampant, its no surprise that a lot of couples are finding it hard to become pregnant. Thanks to the lack of education at early ages, a lot of people think gonorrhea is "no big deal", but it can cause infertility if an infection is left untreated.

The tricky fact of gonorrhea is that an infection can be present without showing the tell-tale symptoms of burning during urination, vaginal discharge, fever, having a "cold" that never seems to go away, or a sore throat. Females, due to our internal organs, have the special ability to present symptoms internally, which makes them harder to detect (especially if you are afraid to look at your own vagina).

So, if some infections don't show any symptoms, why is this a problem if some strains of gonorrhea are now drug-resistant? There are a few answers to this question:

1. People will continue to spread it, and those few individuals who are responsible enough to get tested and treated regularly will have a harder time finding effective treatment options. This is especially sad since current gonorrhea incidence rates have been reported at historically low levels.

2. Treatment regimens will start to become pretty intense, and much more costly. The days of gonorrhea being considered treatable with a regular antibiotic are coming to an end, and some health care providers may start to consider antibiotic cocktails, which are not only annoying but also costly.

3. Symptoms that are rarely seen, with the exception of severe infections that are left untreated, will start to become more common. Infertility is one, caused by salpingitis (scarring of the fallopian tubes) and Pelvic Inflammatory Disease (PID). Other symptoms can include spreading of the infection to the joints and heart valves, as well as meningitis.

4. If pregnancy does occur in infected women, it can be passed to the baby during birth, which will raise the rates of infections in younger populations.


Now, before I end this incredibly lengthy post, I'd also like to bring your attention to the fact that THE PLAGUE IS BACK!


I have to admit, I'm pretty excited about this since I'm heading to Oregon this weekend. Who knows, maybe I'll get lucky (with the plague, that is)!

Let it be known that 100% of the credit for the title of this blog post goes to my partner, who is actually funnier than I am.
Posted by underthemicroscope at 7:42 PM 2 comments: