That's right. Pretty much everyone who has stepped out of their home has been exposed to, and has S. aureus on their skin. Staphylococcus spp. are even known to inhabit our noses! In 2003-2004, approximately 29% (78.9 million persons) and 1.5% (4.1 million persons) of the U.S. population was colonized in the nose with S. aureus and MRSA respectively. But, its important to remember that not all strains are multi-drug resistant, or MRSA. (Yea, MRSA. You've heard that before. Remember when MRSA was considered a gay-bacteria a few years ago because the media spread premature and uninformed stories?) 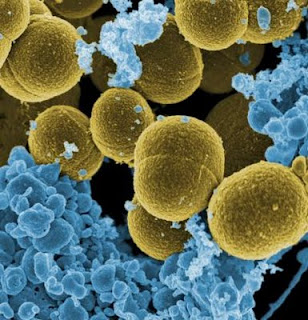 S. aureus is a facultative anaerobic, gram positive bacteria that causes a wide range of infections in humans. It can be involved with food poisoning as an enterotoxin, or within the skin. Very rarely is S. aureus found in the throat and, although almost a third of the US population has it in their nose, it hardly ever is pathogenic in that particular locale. For skin infections, S. aureus can cause anything from pimples to abscesses, and if it goes untreated, it can quickly progress to  pneumonia, meningitis, osteomyelitis, endocarditis, toxic shock syndrome, and sepsis!

My friends make fun of me for washing my feet every day when I get home, but THIS IS WHY!
In 2005, almost 86% of initial S. aureus infections hospital acquired. Unfortunately, it's a rather common situation for individuals recovering from surgery or major wounds. Also, S. aureus is a common cause for styes in the eye, especially when transferred from the nasal cavity. A few months ago, a small study was performed to analyze the cleanliness of BART seats, and the results showed colonies of MRSA, among lots of other fun things, inhabiting the fabric seats! So guess what's all over your favorite pair of jeans and that cute hoodie! It's no wonder every BART car I've ever been in has smelled like a giant fart!

Now, please note that all this information is not my way of saying "don't worry!" in response to the meat contamination. What I'm trying to say is that, well, I'm not surprised.

I'd like to give you tips on how to avoid such bacteria, but to be honest, your attempts would be relatively futile, considering how widespread S. aureus is, and how unsanitary our day-to-day habits are. I mean, when is the last time you sanitized your computer keyboard, or your cell phone? Do your jeans often touch the same surface as your head and face, such as a pillow or a couch? Are you touching your face right now?!

Remember when you only had to be worried about cooties?


Sidenote: I've been asked to occasionally submit some pieces to Vegansaurus, a bay area vegan blog. I highly suggest you check it out, and also, let me know if there's anything you'd be interested in seeing me write about for Vegansaurus.
Posted by underthemicroscope at 10:31 PM No comments: