I’ve had a number of inquiries about the Ebola outbreak, whether for clarification (“what is Ebola?” or “should I be scared?”) or desperation (“I don’t know what to believe anymore!”). Let me start by saying that it’s OK to be confused or a little nervous. The media has done a great job at reporting on this terrible and unfortunate situation, but has done an even better job at making people nervous or question their ability to prepare for such a situation in their own town.

It’s always been a little aggravating to me that most science reporters or science writers don’t have a science background. There are a lot of benefits to that, such as their vernacular may not be jargon-heavy, or they might be able to cover a wide range of topics on a broad, elementary level. But, there are also a lot of writers that are feeding into the media-based hysteria to get more clicks. How do you get people to read your stuff? Scare the crap out of them.

You really can’t escape it. I’ve seen posts on Facebook to articles that detail inaccurate methods of Ebola transmission (thanks, “friends”…), and I even heard about it on the radio. Whenever I drive into work, I usually have the radio on so I can get traffic updates. A week ago, one of the personalities on a stupid morning show was talking about the isolated testing for Ebola that was happening in Sacramento (which actually happened for some missionaries, that much is true), and it really made me sad, because it solidified how little people feel they need to research the stuff they read online. Everything the deejay said was inaccurate, and all I could think about was the hundreds (thousands maybe?) of people listening at that moment...and believing everything.

But I’m not writing this to call people stupid, or make anyone feel bad about their news choices. Instead, I’m writing to give you the facts of what I’ve gathered so far. I’m not on the front lines, and I may not be a popular blogger or writer for Jezebel or Huffington Post, so I’ll it up to you whether I’m contributing to they nonsense or not.

There are only a few places in the world that are allowed to research and work with any and all strains of the Ebola virus. For a long time, that list was limited to only major governmental agencies (CDC, etc.), especially research agencies that have the capability to work with biosafety level – 4 (BSL-4) pathogens. You can read more about BSLs here, but I’ll break it down for you:


Get it? It’s incredibly dangerous, and you should thank the researchers that risk their lives to perform the groundbreaking experiments that they do. If you want to read the follow-up report regarding a researcher accidentally becoming exposed to Ebola, you can download that here.

Am I at risk of becoming infected?
Unless you are a health care worker who is working with individuals who are infected and currently experiencing symptoms, your chances of contracting Ebola are slim to none.

With that being said, the only known method of transmission for Ebola is direct contact with the bodily fluids of an infected individual. If you have traveled to Africa recently, and have had contact with someone else’s bodily fluids, you may want to check in with your doctor. Once someone has recovered from the virus, they are typically no longer contagious, but the Ebola virus has been shown to be present in semen for up the 3 months post-infection.

This isn’t like our seasonal flu. Ebola is an incredibly debilitating infection that can have symptoms including high fever, headaches, muscle pain, vomiting and diarrhea, and unexpected bleeding or bruising. There have been some really sad stories about churches, mortuaries, and even entire towns banning traditional funeral and burial practices because it puts otherwise healthy people at risk.

Will the outbreak spread to the US?
The CDC has not indicated any potential risks for the outbreak to spread. Yes, there have been medical professionals and missionaries that have contracted Ebola during this outbreak, and yes, they have been brought back to the US for treatment.

BUT, there is a reason for that. Almost all the major research that has been done to figure out the Ebola virus has been conducted in the US (or in collaboration with the CDC). Experimental treatments are here, better medical facilities with isolated rooms and chambers are here.

Let me put it this way: As of right now, there are 2,615 cases of Ebola between Guinea, Sierra Leone, Liberia, and Nigeria. There are more than 1 million individuals who are infected with HIV in the US, and 1 in 6 of them are unaware of their infection (typically due to negligence with regular testing). HIV is also spread through direct contact with bodily fluids. But, every time you go into a hospital, you don’t panic about HIV because medical facilities are prepared to handle and minimize these types of risks. Take a deep breath and don’t believe everything Donald Trump says. 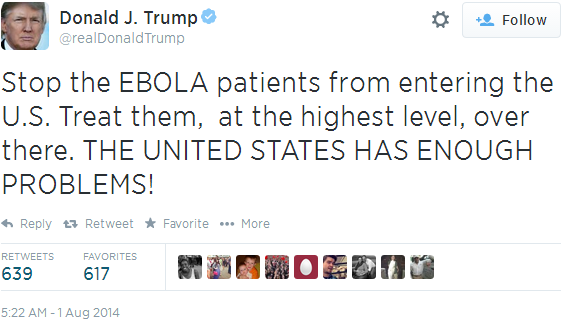 OK, I believe you about the risk of getting Ebola in the US, but I’m still paranoid and want to track it every day.
That’s fine. Check out this amazing website that will give you a detailed update every time something happens with the outbreak. You can also watch an illustration of the spread of the outbreak since March 14, 2014.

What about treatments? Why aren’t there treatments?
There are currently 3 companies working on developing experimental treatments against the Ebola virus: Tekmira, Biocryst Pharmaceuticals, and Mapp Biopharmaceuticals. All of them are in very early stages of development, meaning none of them have been approved for use in humans. ZMapp is the product that is getting the most media because the experimental monoclonal antibody-based therapy was given to two US patients in Liberia.

Since this experimental therapy has not been approved, it requires each patient to consent, and understand the potential risks associated with experimental, non-approved therapies. Compared to some of the other funded research, Ebola isn't seen as a major threat. Maybe that's because we haven't seen an outbreak this large before, or that it hasn't been a threat to the US yet. Either way, it's getting the attention it needs now to really get some momentum in terms of pushing drug and vaccine development through to (hopefully) a reality.

It is possible for patients to recover and survive an Ebola infection. In order to do this, the patient needs constant monitoring for fluid balance, oxygen and blood pressure, and additional treatments for complicating infections.

This is a lot of information to digest, so I'm going to leave it at that. If you have any other questions that you'd like answered, feel free to let me know!
Posted by underthemicroscope at 6:30 PM 1 comment: