I've been wanting to write this post all month, but every few weeks I'd see more examples I wanted to include, and my frustration increased exponentially. I should start by saying that I consider myself somewhat of a "political radical" of sorts. By that, I mean that, while I have a lot of respect for the idea of a true democracy, I have a low tolerance for the amount of actual representation of the average American citizen. I try not to talk about my political opinions on this blog, because frankly, that's not why I started this blog.

But, science and politics are very intertwined. From federal grants and funding initiatives for research, to government institutions and committees, there is no separation between "lab and state". Sometimes, that's a good thing. Some of the federal regulations that mandate safety and procedural guidelines for research ensure that working in research environments (labs, fieldwork, etc.) are safer for the people doing the work. Also, there have been a lot of scientific exploration and advancements due to federal funding.

While some presidents have taken a marked interest in science (some recent examples: G. H. W. Bush's "Decade of the Brain", and Obama's White House Science Faire), most of their actual involvement comes in the form of spewing talking points prior to being elected. How many US presidents have championed scientific innovation and research initiatives? Science has never really been on the forefront of any presidency since the moon landing.


Think about how political attitudes about science directly affect the public. The 10th anniversary of Hurricane Katrina was just a couple of months ago. Its estimated that the hurricane and flooding killed over 1,830 people and caused over $108 billion in damage. Scientists continually warn about the increasing severity of future storms and weather conditions, rising temperatures and pH changes in the ocean, and major reductions in natural resources. While no one could have anticipated the number of fatalities or the severity of the damages brought on by Hurricane Katrina, government initiatives to protect communities from future natural disasters (like, planning and response measures, zoning to recognize emergency response for all communities, etc.) may be more successful if scientists were acknowledged and involved. Instead, Senator Ted Cruz, the chairman of the United States Senate Commerce Subcommittee on Space, Science and Competitiveness, is a science denier.

Scientists and medical professionals have worked tirelessly to eradicate many diseases in the US and around the world, through the development of vaccinations and therapeautics with increased effectiveness, lasting power, and fewer side effects. Government agencies have been directly involved in funding and spearheading such initiatives. Unfortunately, some presidential candidates (whether we consider them serious or not), have decided that the subject of vaccinations are now appropriate debate material (I'm looking at you, Donald Trump, an idiot, and BEN CARSON, a retired neurosurgeon).

There's a clip in this article that shows the specific section of the republican debate where vaccines come up. Ben Carson and Donald Trump will actively talk about vaccines, but refuse to even acknowledge an important question from the moderator: "as president, you will be in charge of the Centers for Disease Control and the National Institutes of Health, both of which say you are wrong. How will you handle this situation as president?"

Meanwhile, polio is still an issue in some parts of the world, among other serious diseases that are preventable by vaccination.

You'll also notice, if you watch that clip (and others featuring Trump talking about vaccines), that Trump is also great about reinforcing stigma around disease. Sometimes, he's blatant about it, like when he said this about ebola patients: 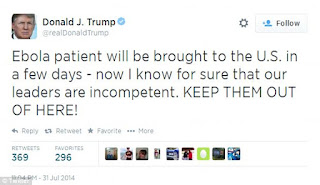 Other times, he's sneaky about it. During the debate, he said that "beautiful babies" are injected with huge amounts of vaccinations ("it's meant for a horse", he says, describing the supposedly cartoon-sized syringe that would never actually be used on children), and then goes on to say that the child eventually (1 week later) develops autism. Sure, no one wants their child to develop autism or any disorder, developmental or otherwise. But its clear from Trumps wording that he wouldn't consider a child with a disability as beautiful.

With the fiscal year ending, the House of Representatives has repeatedly voted on a measure to "defund" Planned Parenthood. Speaking of an issue that directly affects the all people in the US, women's health issues are always debated by presidential candidates. Even though federal funds totaling $528.4 million went to Planned Parenthood in the 2013-2014 fiscal year, the organization is not allowed to use federal funds to provide abortion services. So, by removing federal funding, 96% of the medical services Planned Parenthood provides, such as STD testing and treatment, contraceptive prescriptions and education, cancer screenings, routine check ups and gynecological exams, and prevention services, would be severely reduced. Yet, not eliminated entirely. In the 2013-2014 fiscal year, only 41% of Planned Parenthood's funding came from federal sources (through standard MediCal reimbursements, etc.). I wont go into how these services, regardless of how you feel about abortion (which only makes up 3% of Planned Parenthood's procedures), have an influence on the health and overall quality of life for many people -- not just women, not just low-income communities, and not just sexually active teens.

By the way, a Planned Parenthood clinic in Thousand Oaks, CA was set on fire this week.

So, while you listen to presidential candidates ramp up their campaign circuits, and recycle talking points that don't actually address any of the serious questions asked of them, think about where science and medicine fall into play. What do these issues actually mean for the future of the American economy? How do politicians navigate these issues for the American public? Just think about it.
Posted by underthemicroscope at 9:39 PM 1 comment: