Yes, let's. I didn't really want to have to touch on this issue, because I didn't want to risk putting my personal views on "hot topics" out there. That's not the purpose of this blog. Yet, I did decide that it might be helpful if I made a guide to some things that are being thrown around and actively banned.

Embryonic Stem Cells
Do you really understand what happens? How they are used? Where they come from?
Really, without understanding the basics, I think its hard to form an opinion. Most news stories don't dabble into the real science of it, so where else are you going to get this information?

So, let's jump right into it.

What are Embryonic Stem Cells, anyway?
Embryonic Stem Cells (also called "Early Stem Cells" or ESCs) are totipotent stem cells, meaning they have the ability to develop into just about any type of cell in our bodies. See, each cell needs to be specific to what its working to do. Nerve cells need to be specific to sending and receiving signals, heart cells need to be specific to beating (and skipping beats, if you're feeling fancy), and so on. It's kind of like how people go to school to become specialized for their careers. You wouldn't want a gourmet chef working on your car, a veterinarian building your house, or a vegan cooking you a honey-baked ham, right? I guess that's...a silly analogy, but stick with me.

These totipotent cells come specifically from the fusion of germ cells which, if allowed to develop in the right conditions, will turn into an embryo and eventually go through the basic cycles of human development. You can see this occurring in the following video from HHMI:

In the video, at around time 00:50, you can see a very important structure being formed: The Blastocyst. I'm sure you've heard of the cell multiplying over and over again, but at this point, the cells divide into two very important classifications: the "structural" cells that assist the embryo in developing, and the Inner Cell Mass (ICM). The outer cells that form the structural components create things like the placenta, and assist with attachment to the endometrium that lines the inner most layers of the uterus. These outer cells form the hollow ball structure of the blastocyst, as seen below. 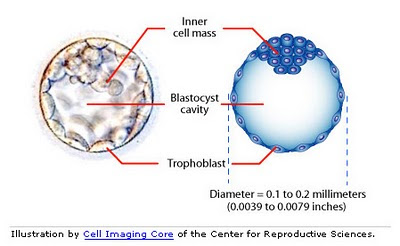 As you can see, these blastocysts are pretty tiny... no where near the size of a full fetus yet. 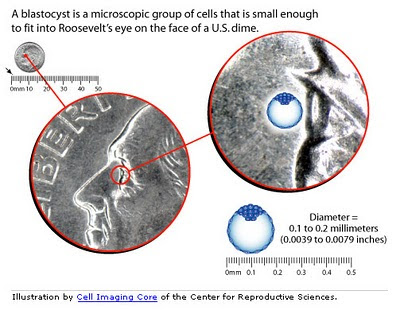 The ICM actively develops into the mammal, if conditions are appropriate. The cells that make up the ICM are totipotent as the blastocyst is developing and implanting. These are the cells that are harvested for Stem Cell Research.

None of those people were doctors, scientists, or...educated in human development whatsoever.


Actually, what happens is this:

Everyone involved (ie- the people the cells are harvested from) are informed completely and given the option to have their germ cells used for research purposes. This usually happens if a couple opts for IVF treatments if they cannot get pregnant through "natural causes", or if they are trying to obtain pregnancy through a surrogate party. In this case, they never just fertilize and store (deep freeze) just one. IVF is a very tricky procedure that can take many, many tries for an actual success.

Now, there are actually other ways to harvest stem cells for treatments, but the cells will not be totipotent. Pluripotent and multipotent cells have more specificity due to the advancement of their differentiation within the body. An example of pluripotent stem cells would be those from an organ system: they are more specific in overall function  than totipotent stem cells, but still have the ability to further differentiate to a more specific cell type/function within the organ system.To harvest pluripotent and multipotent stem cells, blastocystic cells do not have to be used. In some instances, they can be harvested from adults and even from the patient themselves (depending on the treatment method and type of cells harvested). In fact, some procedures are being done to harvest mesenchymal stem cells from human teeth!

The Uses:
The possibilities are endless for stem cell research and treatment. Some of the diseases or medical problems that are actively being researched for treatments with stem cells are: Brain damage, cancer, spinal cord injury, heart damage, mutated blood cell formation, baldness, some forms of deafness, blindness and other gradients of vision impairment, amyotrophic lateral sclerosis (ALS), Crohn's disease, Parkinson's disease, Alzheimer's and dementia, birth defects, diabetes, immunodeficiencies and wound healing problems, infertility, paralysis, organ and tissue damage, and on and on!


Some treatments are currently being used in veterinary practices with very enthusiastically positive results. These dogs happily wag their tails in support of stem cell treatment:


The Ban:
You may or may not have been following the recent flip-flopping in the judicial system regarding stem cell research funding last month, but as of today, the court temporarily lifted the ban that was put in place about a week ago. The government has a very large part in scientific research, through the National Institute of Health (NIH) funding grants and special interest funds. Especially regarding stem cells, the funding for embryonic cell use in research for medical advancement and treatments is very financially fragile, and unfortunately, expensive. Luckily, the stay was motioned today, but the fight is not over. This is an issue that comes up in every election, every political campaign, and every clash between the left and right.


To read more on the stay that was motioned today, TIME has posted a very thorough article on their website, here.


Since this is a very important topic, I suggest you keep up to date through NIH Court Order updates on their website: http://stemcells.nih.gov/.


For anything that is ethically debated between conservative, religious groups and scientific believers, I urge you to educate yourself. Learn both arguments, and form your own opinions.


...but don't forget that science is always right.

Posted by underthemicroscope at 8:11 PM No comments: