Tales of the WebMD's Symptom Checker (and it's blatant inaccuracies)

After a fun weekend spent at the Monterey Bay Aquarium with my family, I woke up this morning feeling terribly ill. I generally consider myself to be in good health; I rarely get sick, and when I do, my symptomatic stage only lasts briefly before recovery.

With that being said, I am a total hypochondriac. I know far too much about diseases, and I'm constantly driving my friends, coworkers and family members crazy with my static state of worry. Headache? Must be a brain aneurism. Back pain? Herniated disc. Tired? Must be cancer. Botulism. Sun stroke. Gangrene.


This kid is the best part of the movie "The Switch".
So, let's back up a bit. On Thursday or Friday, a lady at my place of employment returned from being sick with "a cold". She still sounded awful, but we've all experienced that residual upper respiratory gunk at the end of a sickness. I'm mentioning her because I'm pretty sure she was my introduction, my infector of sorts. Yet, it could have been anyone (...but it was probably her).

Friday, nothing. I felt fine. I finished out a stupid week at work, and went home for date night.

Saturday, great. Went to the aquarium, touched a lot of things. Washed my hands a lot.

Sunday, I woke up feeling a bit off. I had a sore throat, but was it because I had slept with my mouth open? Did my nasal cavities drain into my throat? Eh, I'll walk it off. Went to lunch got my hair done (I know, so glamorous), and felt tired whilst doing so (maybe I was relaxed? I don't know), but no trace of a sore throat. By the time I made it home (eh, 5ish?), I was beat, my throat was sore, and I was developing a headache.

So, I did what any normal person would do. I made some soup. Ate 4 cloves of raw garlic. Made some ginger tea, squeezed an entire lemon into it. Gargled with salt water, repeatedly. Took my vitamins. Stayed hydrated. Peed a billion times. Went to bed (relatively) early.

Usually that regimen works, but this morning, I woke up SICK. Symptoms: mild fever (which is pretty odd for me, as i usually run a bit cooler than the typical body temp), terribly sore throat, and weepy, crusty eye. One of these things is not like the other, one of these things just doesn't belong.

I called out sick to work because I'm not willing to infect anyone else (because that's just rude!), and went back to sleep to try to "sleep it off". If you know me at all, you'll already know that me going back to sleep is quite a feat in itself. I'm a "up at 6" type of person, but I managed to knock myself out until 9:30 AM. Then, I called my partner to drum up some sympathy. This is exactly what he said to me:

"Weepy, gross eye? Uh oh, you know what that sounds like? Pink eye. Do you know how you get pink eye? From going to aquariums, touching all the railings that all the gross little kids touched with their little, fecal contaminated hands and then rubbing your gross hands all over your eyes."
I've never had pink eye... but I am a chronic eye-rubber...and I did touch a lot of railings that day.


Remember when I tweeted about not allowing pants in my bed? Yea...
Long story short, it's not pink eye. That conversation happened 5 hours ago, and everything is already feeling better (because my immune system is AWESOME).

But, for fun, I decided to check WebMD's symptom checker. I did this a few months ago when I had an odd kidney pain (which ended up being just muscle soreness, but thanks for asking), and my results were either a bruise...or kidney failure.

So, of course, conjunctivitis (or pink eye) was on the list of possible illnesses, but so was blindness. It's best to be thorough?

But then I thought, why aren't there any parasites on that list? So I checked all the symptoms. I said my eyes were bleeding, yellow, pink, red, itchy, droopy, etc. For all they know, my eyes were falling out of their sockets. Even after I checked some severe symptoms, the website didn't tell me to contact a doctor or to call emergency medical services. What a horrible website!

There are many parasites that can affect your eye tissues and sight. Some are caused by nematodes, others are caused by single-cell parasites. The range of symptoms these parasites can cause are incredible! Best of all, we do have (most of) them in the United States!


The parasite in the following video is called Acanthamoeba keratitis. 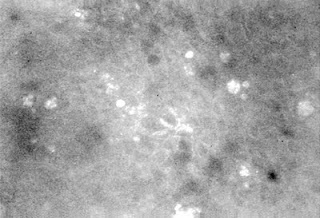 Of course, since its relatively easy to become infected with A. keratitis, it's relatively difficult to treat. Medical treatment with medicated eye drops and antiparasitic medications usually fail, which leaves surgical treatment. So, maybe just go head and spend that extra $4 to buy packaged contact solution?

Moral of this story? My local UPS guy could probably diagnose anyone better than the WebMD Symptom Checker.
Posted by underthemicroscope at 3:38 PM No comments: